PUBLICATIONS
My most recent publication appears in Pedagogy, and another article will be forthcoming soon in Medieval Feminist Forum. I have published on medieval literature and manuscript studies in New Medieval Literatures, the Journal of Medieval Religious Cultures, Medieval Sermon Studies, and Notes & Queries. For a full list of my publications and presentations, view my CV here. Several of my publications are available on my Academia.edu page. 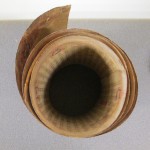 UPenn, MS Roll 1563: Digital Facsimile
Published June 2014. Through the University of Virginia’s Rare Book School course, “The Medieval Manuscript in the 21st Century,” taught by Will Noel and Dot Porter at the University of Pennsylvania Kislak Center for Special Collections, Rare Books, and Manuscripts, I designed a digital facsimile of a devotional/prayer roll from 15th-century England. My article describing the manuscript and its texts appears in Notes & Queries 63.2 (June 2016): 196–199. Click here for more information about the manuscript and for access to all aspects of my digital project. 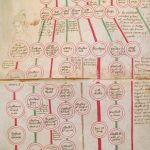 Emory’s Fifteenth-Century English Chronicle Roll
On February 27-28, 2018, I organized a digital editing workshop for twelve graduate student participants from across the United States; the workshop was hosted by Emory’s Rose Library and Pitts Theology Library. As part of the Digital Editing and the Medieval Manuscript Roll (DEMMR) project at Yale University, the workshop participants, the DEMMR editorial staff, and I are working on a complete digital edition of Emory’s fifteenth-century English chronicle roll (Emory University; Stuart A. Rose Manuscript, Archives, and Rare Book Library; Ancient, Medieval, and Renaissance Eastern and Western Manuscript Collection; Box 2, Folder 1). The roll begins with the seven days of creation and concludes with Henry V. A sixteenth-century English addition to the roll updates the genealogy to Queen Elizabeth. A zoomable image of the manuscript is now available. A video of my presentation, “Emory’s Fifteenth-Century English Chronicle Roll: Late Medieval History Writing and Sixteenth-Century Nobility,” from the March 1, 2019 symposium at Emory’s Pitts Theology Library is available here. 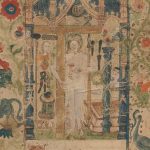 Yale University, Beinecke MS 410 & Osborn MS a14
As noted on my “Teaching with Material Culture” page, through my work with DEMMR, I have contributed to the following forthcoming digital editions of manuscript rolls: 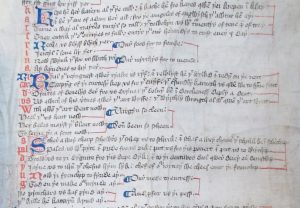 MS Bodley Roll 22: The Alliterative Katherine Hymn
I am also in the process of designing a digital edition of Oxford, Bodleian Library, MS Bodley Roll 22. Known as The Alliterative Katherine Hymn, the alliterative stanzaic life of St Katherine of Alexandria features a complex manuscript layout with graphic tail-rhyme, acrostics, and more. While the poem was edited in 2004 by Ruth Kennedy (EETS o.s. 321), the digital edition will allow users to view and study the remarkably consistent illumination and punctuation of this manuscript roll, which is the only known medieval alliterative text professionally written on a parchment roll. Using Mirador, I plan to tag the text of the Katherine hymn to reveal commonly occurring alliterative formulae and to direct users to similar passages in other late medieval alliterative works.